Clerics & Leaders Call for The Ouster of NEP PC

Religious leaders and elders from Garissa county yesterday demanded the transfer of the Northeastern PC James Ole Serian who they accuse of instigating inter-clan conflicts.
"The PC has consistently used his office to frustrate communities in Garissa. He has allowed influential personalities to grab land in the town knowing very well how sensitive the land issue is in this county.
It is for this reason that we are calling on the president through his internal security minister and provincial administration George Saitoti to act fast before we lose more lives, "said Daadab district peace chairman Osman Ibrahim on behalf of the Aulian clan elders.
Their statement comes just a few days after Prime Minister Raila Odinga ordered investigations into the PCs conduct following a spate of inter clan clashes in Garissa County.
The PM was reacting to a letter by Deputy Speaker Farah Maalim who accuses the PC of compromising the security of the Province by facilitating land grabbing.
The over 50 elders and religious leaders drawn from Garissa county demanded the immediate sacking of the administrator whom they accused of laxity.
Late last year there was full-scale confrontation in Garissa town between two clans that left six people dead in the presence of security apparatus.
The claims came a week after land clashes rocked Garissa town and left two people dead and several injured including a peace committee chairman Dakane Karur.
Efforts to reach the PC to respond to the allegations leveled against him proved futile as calls on his phone went unanswered.

This is a report by The Nairobi Star's Stephen Astariko
at 2:10 AM 5 comments: 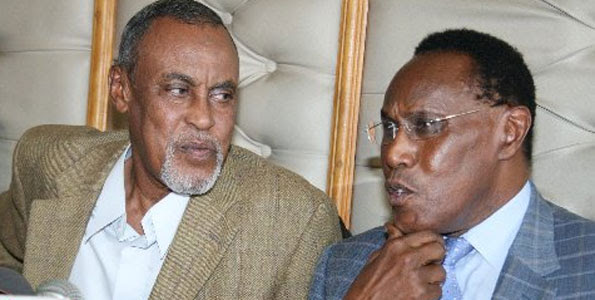 If not stopped by Kenyans of good conscience, Yusuf Haji and Saitoti will destroy much of Kenya's pride, international standing and economy. How and when Kenyans will wake up to this reality is not known but I have a feeling much of the public discourse on the war will change once the first images of dead Kenyan soldiers  tied to the back of a pickup trucks being dragged through the streets of Kismayu or Af Madow are broadcast on Al Jazeera.

Kenyans have to realise this is a costly war that does nothing to further their interests. This war will not feed the hungry in NEP and Turkana. It will not employ the hundreds of thousands of youths who are educated and unemployed. This war will not cure those dying in the Kakamega of dysentery and HIV. It will not bring peace those terrorized by the sungu sungu and Mungiki.

All this war does is risk the life and limb of the Kenyan soldier, encamped in a Somali bush, eating expired food. All this war does is bankrupt our economy and increase inflation. That this war was launched to get back three whites should tell you how stupid and reactionary it is. The government was not forced into action when tens of Kenyans were butchered in Turkana. DoD's sense of shame was not touched when Ethiopian bandits occupied a Kenyan village and prevented the PM from visiting.

It deserves to be mentioned that the bravest men fighting in our Army are Kenyans of Somali descent who took an oath to protect this country from foreign enemies not fight for a political group. The Mount Kenya Gang is cooking up a fake rationale for invading Somalia to further its political agenda. Our soldiers are being sent to war to boost PNU's polls and to take the nation's mind off of what's going on in the Hague.

These two degenerates have really set an example in bad leadership, mismanagement and neglect of duty.

Yet, now it turns out these wimps turned hawks are now sending thousands of Kenya's boys to war with a faceless shadowy group that is battle hardened.They've decided to deploy thousands of Kenya's lily-livered army to fight in a region Ethiopia and America before have failed so badly.

Al Shabab has nothing to lose and everything to gain. All this military invasion does is coalesce the population around the fake rallying crying that is 'defending the homeland against aggression by a foreign Christian enemy' (Just yesterday two new British recruits were napped by the Police).Their middle eastern financiers will flood the group with hundreds of millions of dollar while a single blast in Malindi or Mombasa will do all the damage it seeks to harm Kenya financially.

Military adventurism has failed in Somalia and this time round it will not be any different.This is an exercise in futility and the ever-changing rationales for it says all that you need to know. Kenyans need to wake up to the improprieties of these two men and their minions. The failure of 'Operation Linda Nchi' will bring forth the highly ethnicized nature of Kenya's military and will only diminish civilian control over it.

Finally, I should mention that Yusuf Haji spoke to the BBC Somali Service yesterday while in Mogadishu and declared that no Kenyan troops are in Somalia. This is clearly a lie but it says a lot of the man's lack of diplomatic suavity and incompetence.
at 8:12 AM 2 comments:

Why Kenya's Foray into Somalia is Counterproductive and Destined to Fail

It remains to be seen whether Kenya will stay in Somalia for any considerable length of time but its pretty obvious this latest military move is nothing more than a knee-jerk reaction.

Elements in Somalia whether allied with the dreaded Al-Shabab or profiteering bandits have been relentlessly provoking Kenya by violating its territory and staging brazen daylight kidnappings. It is natural for anyone to react violently when tested by a bully. However, what needs discussion here is whether Kenya's inexperienced military with its antiquated hardware has any long term plans for combating the Al-Shabab threat.

A quick bombing raid of outlying Somali villages will not do away with the threat that is posed by Al-shabab. Neither will a prolonged ground combat which will only serve as a recruiting blitz for the terrorist movement. We all know how antagonistic Somalis are to any form of foreign occupation; even from what has been up to now a benevolent neighbour.

In an era of near economic crisis, with inflation this high and the shilling tanking at rates reminiscent of the Zimbabwean dollar, getting bogged down in a guerrilla war with an entrenched and highly mobile enemy is nothing more than inviting disaster.


The unintended consequence of this military campaign might be forcing the drought battered population into the arms of the Shabab all over again. Also, if Kenya's intentions were to protect its tourism, suicide bombings in Nairobi and Mombasa will do not much to encourage visitors to come to Kenya.
Given how amateur and corruptible our security and intelligence apparatuses are, the Shabab will be able to attack within Kenya with significant ease.

Kenya's own indigenous Somali population will also become the subject of unnecessary vilification and will be seen by the rest of the country as having divided loyalties, wrongly of course.

So What is the best answer in this scenario? Certainly its not just sitting back while your citizens are terrorized by foreign thugs.

My own thinking is that Kenya should beef up security around its border with Somalia and improve its intelligence gathering. Surgical strikes against militant groups suspected of being behind kidnappings, covert operations and commando raids within Somalia to kill the leaders of the bandits/terrorist groups that are behind cross-border raids into Kenya and closing up all revenue streams coming to Al-Shabab through money laundered into Kenya.

Al-Shabab is an evil organization that has perveted Islam and Somali culture to cause indescribable pain and suffering but its not an entity that Kenya alone can eradicate.

For Somali Speakers, here is a lecture by Sh. Umal about the group

This is heartbreaking, pathetic and sad. It's a set back for all those who are working tirelessly to rebuild our society and a huge win for the forces of darkness that try to separate us for profit and political gain.