Maryan Hussein, an employee of Garissa Municipal Council has thrown her hat into Garissa County politics. Her campaign launch was attended by various representatives of women's groups. She called for a permanent change in the status quo, the recognition of women's contribution to society and their ability to succeed in leadership roles. 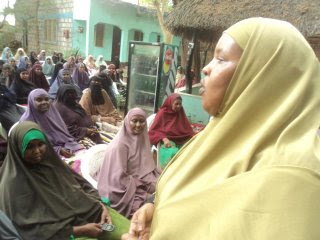 Maryan said many women who lost their livestock due to the sporadic drought have lost their livelihood and were in dire need for micro financing projects that will help reduce the impact of the poverty. she added: "I bilieve i understand the county's problem having bred here and thrust into the thick of problems but after suffering the problem i come with a solution and not bickering," "i was shocked since it was taking me long to make some voter understand the position i will vie for " she said She urged men to shun their preconception that women can never be leaders . The ODM nominated mp Sofia Abdi was the first women who ever tried a parliamentary seat in Ijara constituency of Garissa county 1997 elections but lost .same to others who have been trying civic seats .